Local talent in the spotlight at Christmas Lights Switch On 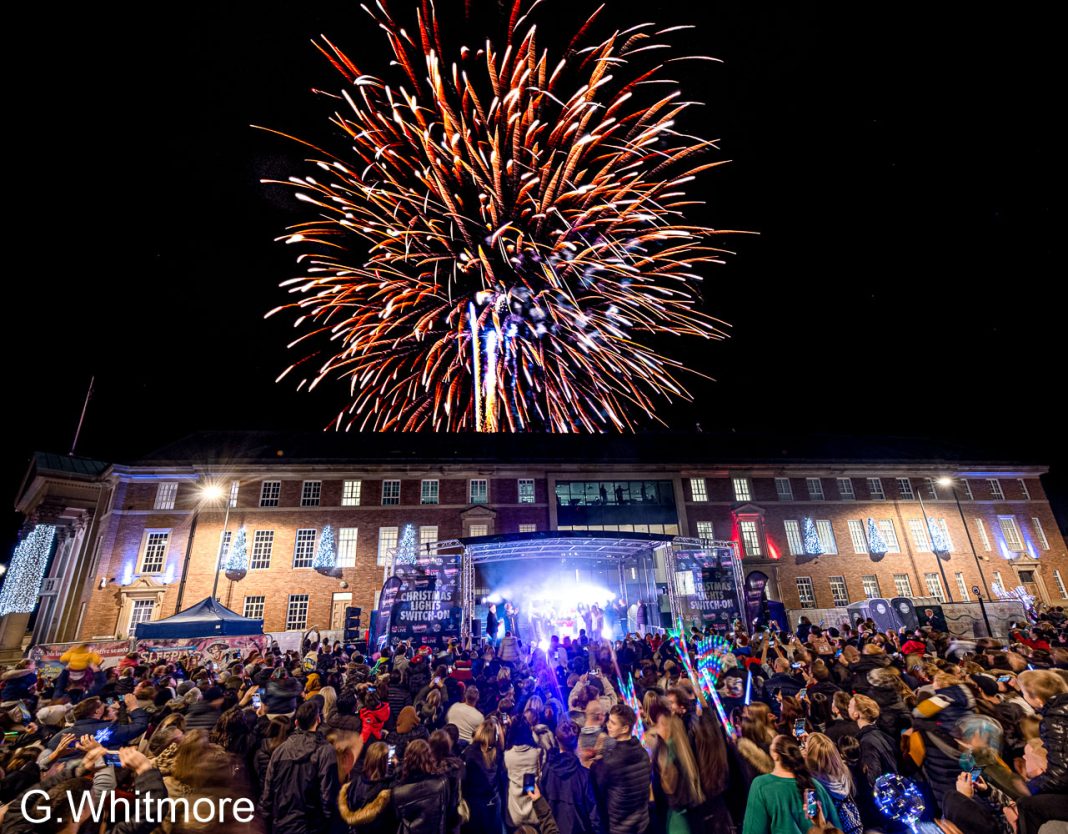 The talent of local people from across Derby’s communities shone brightly at the city’s Christmas Lights Switch On event on Saturday 13 November.

An estimated 3,200 people flocked to Derby city centre on Saturday to watch singers, dancers and the Derby Lantern Parade, organised by Surtal Arts, light up the streets as it made its way from The Spot to this year’s new stage in front of the Council House.

Unfortunately singer Simon Webbe, former member of the boy band Blue, was unable to make it the city in time for the switch on after his car had a flat tyre on the way. So it was an ensemble switch on as the plunger was pressed by pantomime Dame Morgan Brind, who is playing Nurse Nancy Nightly in Sleeping Beauty at Derby Arena; Richard Brindley aka Sleeping Beauty’s Mervin the Magician; the Mayor of the City of Derby, Councillor Robin Wood; Santa; singers Jess and Amy from party band Cassette Roulette and Miss Derby, Lolly Pain. Show compère Gareth Evans, Smooth Radio’s breakfast show presenter, counted down to the big moment.

The grand finale ended with a stunning fireworks display above the Council House to the sound of Wizzard’s festive favourite I Wish It Could Be Christmas Every Day, a Derby tradition.

We would like to thank everyone who took part in the Derby Lantern Parade, and who entertained the crowds on Saturday. It shows the richness of talent and culture we have here, which is key to our bid to become UK City of Culture 2025.

The parade was wonderful to watch and you could tell people were delighted to be back together to celebrate the official countdown to Christmas. We all missed that last year.

First on stage was the Invisible Friends Choir, who use their love of music to raise awareness of invisible illnesses. They were followed by the Cassette Roulette Party Band, who got the crowd in the mood with some old favourites and modern classics.

Next was the Song For Us Collective with their performance of A Song for Derbyshire – Mountains, an uplifting song celebrating the commonality of human beings of all ages and cultures, co-written by Rukus and Zee Musiq. Part of the nationwide A Song for Us project which commissions leading music creators across genres to write new songs inspired by the people of their county, it was led locally by Baby People. Matteo, Emily, Jess, Alisha, Sam and Tom sang about overcoming hardship, fresh starts, diversity, reflections, unity and joyfulness – all in one song.

Up and coming Derby Grime artist KayGee gave an energetic performance before the arrival of the parade. Led by the Derby Season of Light lantern parade with their beautiful handmade lanterns, the parade travelled through the city centre from The Spot, along St Peters Street, Cornmarket and through Derby Market Place before assembling in front of the stage.

Adults and children carried brightly lit paper lanterns created in workshops led by Surtal Arts as part of their Derby Season of Light season, drawing on the traditional cultural and religious festivals which celebrate light, including Bonfire Night, Eid, Diwali and Christmas. Leading them was professional artist Stephanie Sian Coley with her show-stopping lantern sculpture, specially commissioned by Surtal Arts for Derby Season of Light and created at the Museum of Making. Traditional Dhol drummers sounded the way.

Joining the parade were members of the cast of this year’s Derby Arena pantomime, Sleeping Beauty, in an open top car with Santa and Miss Derby 2021; dancers from the Razzamataz Dance School and Nadia Jane’s School of Dance; character princesses Belle and Rapunzel; and walkabout acts from Cirque Delight and World of Coco.

The next act on stage was Our City of Making, a special dance performance commissioned by Junction Arts and choreographed by Surtal Arts as part of the Derby Season of Light. It brought together two of the city’s oldest diverse communities, Indian and Ukranian, to celebrate Derby as a city of making, combining the folk dance styles of Bhangra and Cossack to create a colourful and high energy performance which was a highlight of the show. Surtal Arts, Naachda Sansaar and Hoverla Dance Ensemble were the performers.

A taste of this year’s pantomime, Sleeping Beauty, followed with everyone’s favourite Dame, Morgan Brind, who plays Nurse Nancy Nightly, and Richard Brindley, who plays Mervin the Magician. Then party band Cassette Roulette returned to the stage to entertain the crowds in the run up to the big switch on.

It was great to be part of the Derby Light Switch on, we enjoyed talking to Derby residents about the benefits Full Fibre broadband is bringing to them. Congratulations again to Jane and Marek the winners of the two tablets worth £200.

The change of location to a bespoke stage outside the Council House was due to the ongoing programme at the Derby Loves You venue in Derby Market Place. The temporary structure also allowed the city to welcome back a full parade for Remembrance Sunday the following morning, providing space for all participants to take part safely before individual wreaths were laid at the Cenotaph in the Market Place.

Now the lights are on, the city is counting down to Festive Derby, with a family Gingerbread trail, two shows at the indoor Derby Loves You venue and a Festive Market among this year’s attractions to get visitors to the city in the Christmas spirit. Find out more at visitderby.co.uk/festivederby.